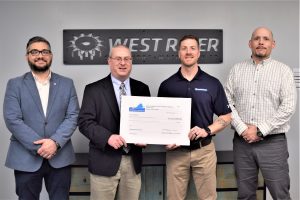 GRUNDY, VA – MARCH 16, 2020 — The Virginia Coalfield Economic Development Authority (VCEDA) closed on an up to $1.225 million loan to West River Conveyors and Machinery Company in Buchanan County, Friday. The funds will be used in the expansion of West River’s business which is anticipated to add 12-15 new full-time jobs in the next 10 years.

“West River Conveyors and Machinery Company is an established Buchanan County business, having operated in the county for nearly 40 years,” VCEDA Executive Director/General Counsel Jonathan Belcher noted. “The company has continued to grow, adding new markets to its service area and growing its job numbers through the years. VCEDA is pleased to assist them in their latest expansion and in helping them to create the new jobs that are part of this project.”

The VCEDA loan funds will be used toward an approximately 8,000-square-foot building expansion, construction of a covered in-feed conveyor shed and concrete pad and the upgrade of equipment, which company officials said will result in better operating efficiencies and the ability to take on additional work at West River’s Oakwood location. The replacement, or addition, of several items of equipment is also planned and will include a CNC plasma table, CNC plasma beam line, sandblasting system, compressor, 3D scanner, shelving and software. Some of the new capabilities will allow West River to better evaluate customer assemblies for manufacturing fit, while providing analysis tools for product simulation and the ability to create visualization of systems for customers.

“This expansion is part of our growth strategy which has been developed over the past two years,” said Pete Savage, West River Conveyors and Machinery Company vice president of business development. “It will greatly improve our work capacity and help us to become more competitive in our current markets and allow us to continue to expand our business into new areas.”

Eric Alsup is serving as project manager on the expansion project.

West River was founded in 1981 and was incorporated in Virginia in 1985. It is one of the largest manufacturers and private employers in Buchanan County. West River is owned 50/50 by its two founders, J. B. Roulett (president) and Joe G. Street (vice president). The company designs and manufactures conveyor systems and equipment, builds belt drives, discharge/transfer stations, tail sections, take-up units, power packs, starters, belt storage units, winches and many unique fabrications to customer specifications. West River sells belt and structure as part of its conveyor packages and also sells new and used conveyor parts.

According to its application, West River has the largest selection of new, used and surplus unused industrial gearboxes in the United States and has delivered parts and products to almost all 50 states and many countries. West River currently serves the coal, aggregate, gypsum, phosphate, salt, potash, and trona mining industries. Conveyor parts (gears, reducers, couplings, etc.) have been sold to the paper/wood, zinc, recycling/waste management, agriculture, construction, mills, marine terminals, energy/power plants and steel industries.