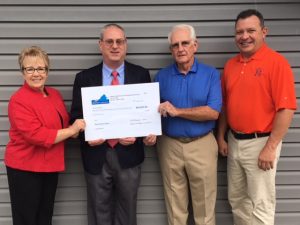 BIG STONE GAP, VA – October 10, 2018 — An up to $90,000.00 grant from the Virginia Coalfield Economic Development Authority (VCEDA) Tourism Capital Improvement Matching Fund was closed Wednesday to be used to help finance the renovation, rehabilitation and improvement of the former Mutual Pharmacy property in Big Stone Gap.

The Mutual Pharmacy property is a two-story masonry structure in the town’s central business district and the Town of Big Stone Gap and the Big Stone Gap Redevelopment and Housing Authority have plans to renovate the building to include dining and commercial space on the first floor and short-stay lodging to support local and regional tourism and community development efforts on the second floor.

“VCEDA is pleased to be able to assist the Town of Big Stone Gap and the Big Stone Gap Redevelopment and Housing Authority in making improvements to the Mutual Pharmacy building which will benefit the town and its efforts to capitalize on the increased tourism it has seen since the release of the movie, ‘Big Stone Gap,’” said VCEDA Executive Director/General Counsel Jonathan Belcher.

According to the funding application, the Mutual Pharmacy, “with its iconic cafeteria, served as an anchor of Big Stone Gap’s downtown from the 1950s until its closing in 2013, mere months before the movie ‘Big Stone Gap’ was filmed in the town. The movie, based on the bestselling novels by Big Stone Gap native Adriana Trigiani, utilized the recreated Mutual interior as a significant setting.  The Town finds itself in position to take advantage of increased tourist visitation following the movie’s 2015 release.”

A tenant has been secured to operate a restaurant on the first floor and to operate the short-term rentals on the second floor. Plans call for the restaurant to be able to seat approximately 200. The second floor will be renovated to include seven loft style rooms available to be rented from one night to six months at a time.