VCEDA Grants to Be Used for Improvements at Breaks Interstate Park 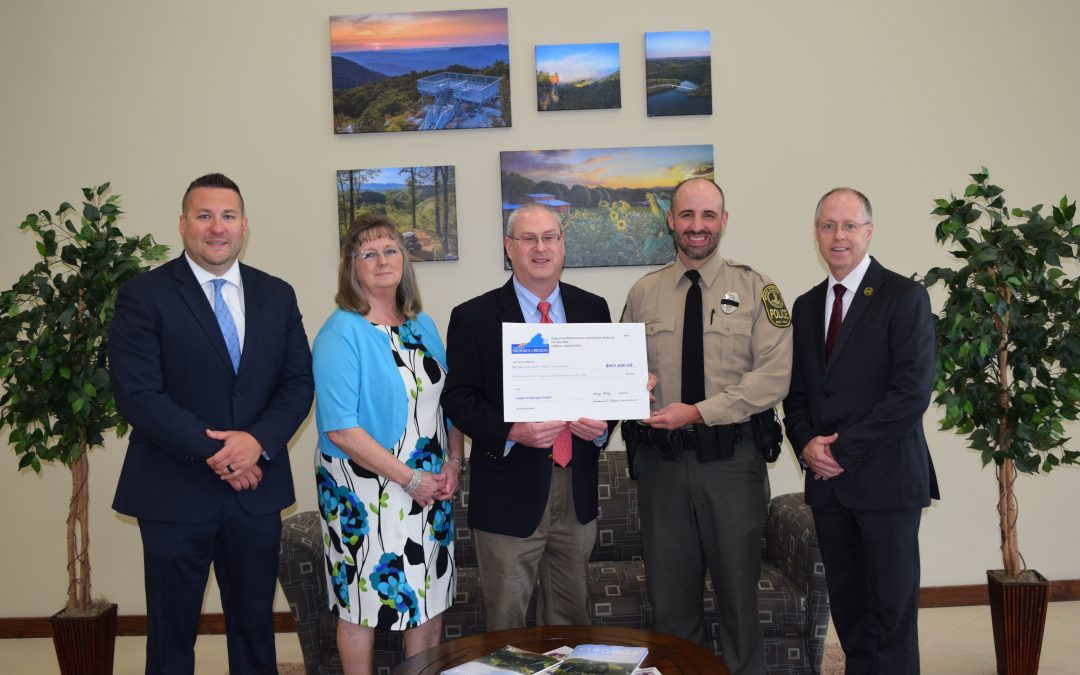 The Breaks Interstate Park was recently approved for two VCEDA grants totaling $1.1 million for improvement projects at the park, including the construction of a new swimming pool. Ceremonial check presentations were held recently and those on hand were, from left, Josh Evans, Dickenson County Board of Supervisors vice chairman; Peggy Kiser, Dickenson County Board of Supervisors chairwoman; Jonathan Belcher, VCEDA executive director/general counsel; Austin Bradley, Breaks Interstate Park Superintendent; and Larry Barton, Dickenson County administrator. They are pictured with the larger of two checks for $601,600.69. A second check for $500,000 was also presented.

BREAKS, VA – July 25, 2022 – Improvements to the Breaks Interstate Park, including the addition of a swimming pool, log cabin construction, cottage renovations and other infrastructure improvements will be made in the coming months at the park due in part to two grants totaling $1.1 million closed recently between the park and the Virginia Coalfield Economic Development Authority (VCEDA).

The up to $601,600 grant will be used specifically to develop infrastructure and improvements at the park and in addition to the pool, cabins and cottage renovations, the funds will also be used for replacement of HVAC unit(s) at the Rhododendron Restaurant, the purchase of an articulated boom lift, the addition of roofs on the outdoor decks of the five existing Laurel Lake cabins and for additional funding for construction of the Potter’s Flats Swinging Bridge.

“Four of the seven projects which are the focus of these grants are related to goals in the park’s five-year strategic plan,” said Jonathan Belcher, VCEDA executive director/general counsel. “The other three projects are those which target improvements to the park’s existing facilities. VCEDA is pleased to assist the park in all of these projects which help to improve the quality of life in our region, an important component in enhancing all economic development efforts.”

The four projects in the park’s strategic plan are:

The new boom lift will provide maintenance rangers a safe means to access roofs, gutters and rooftop HVAC units throughout the park.

According to the application, the elements of the five-year strategic plan are projected to grow the park’s economic impact from its current level of $30.1 million to $40 million by the end of 2026.

The park demolished its decades old swimming pool and replaced it with a waterpark in 2012, which VCEDA also helped to fund. Park officials noted that while the facility has been well received, it has also prompted calls from park guests regarding the need for the addition of a swimming pool.

Multiple sources of data were considered in the formulation of the plan, including case studies from similar sites, visitor input surveys, interviews with key stakeholders, online reviews, social media content and market analysis.

“The addition of a swimming pool to the waterpark facility emerged as one of the top five capital projects which could be undertaken by the park commission in furtherance of these goals,” Bradley said, adding, “The park commission and management feel the pool and these enhancement projects will provide additional recreation opportunities to the local community, create seasonal employment opportunities for local youth and will greatly enhance our efforts in attracting visitors to the park and encouraging them to stay in our area for greater lengths of time.”

“The objectives in our strategic plan were heavily informed by the input we received from our guests, many of whom are from the Southwest Virginia and Eastern Kentucky region,” Bradley added. “We feel that this is fitting, since the park belongs to the public and we are deeply grateful for VCEDA’s financial support as we seek to implement the wonderful ideas which were contributed as part of this process.”