The Virginia Coalfield Economic Development Authority (VCEDA) recently achieved a milestone, having approved more than 300 projects and almost $204 million in funding in the 29 years since its creation in 1988. VCEDA has also helped bring more than 20,000 jobs to the coalfield region.

Since its first project in December 1988 approving funding to the Dickenson County Industrial Development Authority to build a building first used by Donnkenny, Inc., and now occupied by Superior Fabrication, VCEDA has approved funding totaling $203,904,681 for 303 projects throughout the Virginia counties of Buchanan, Dickenson, Lee, Russell, Scott, Tazewell, and Wise, and the City of Norton.

“The work we have done at VCEDA and the successes we have experienced through the years could not have been accomplished without the assistance, input and involvement of our local coalfield county and city governments, industrial development authorities, legislators, educational institutions, businesses and many others and their own individual commitments to making the region an attractive place to live and do business. The support of the coal and natural gas industries, which help fund VCEDA, has been instrumental.” 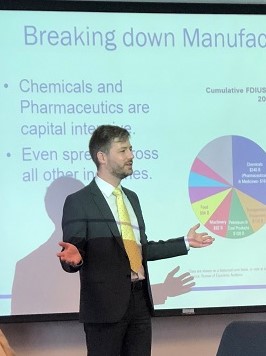 Manufacturing is the largest recipent (40 percent) of foreign direct investment in the U.S. according to speakers from the European American Investment Council in the EAIC FDI seminar coordinated by the Virginia Economic Development Partnership (VEDP) Sept. 29 in Charlottesville at the UVA Research Park. Susan Copeland, VCEDA marketing coordinator, participated in the seminar that featured representatives of the EAIC who spoke to the small group of economic developers from around the state about foreign direct investment in the United States. Economic developers also presented brief overviews of their regions in a one-on-one session with the EAIC representatives. In photo, Florian Stamm, a member of the EAIC Advisory Council, presents information on FDI in manufacturing in the U.S. 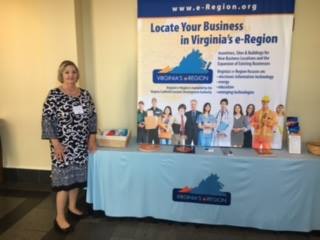 VCEDA was an exhibitor at and a co-sponsor of the Governor’s Summit on Rural Prosperity Sept. 26 in South Boston, VA. VCEDA Marketing Ambassador Charlotte Mullins manned a booth for the Virginia’s e-Region and attended the conference sessions to hear more about opportunities for job sectors in rural regions of Virginia.