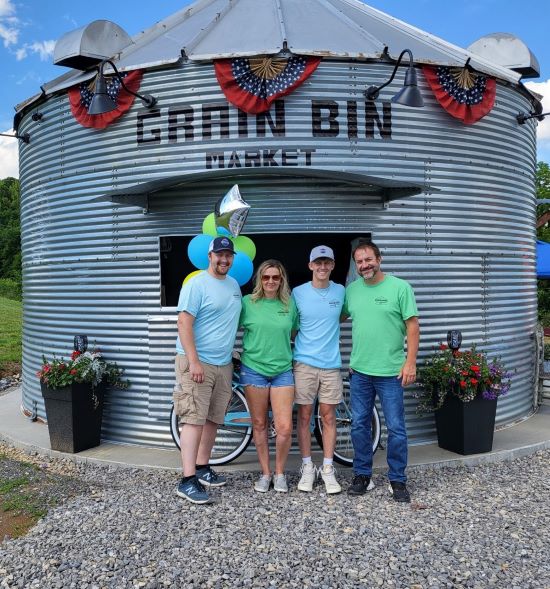 Tina Shipley opened Grain Bin Market, LLC, earlier this year. The business is located in an old grain bin shipped in from Kentucky and put together on site. Grain Bin Market, LLC was a recent recipient of a VCEDA Seed Capital Matching Grant. Shipley, second from left, is pictured with her sons, Dalton and Ethan; and husband, Eddie.

GATE CITY, VA – OCTOBER 31, 2022 – When the Grain Bin Market, LLC opened earlier this year, Tina Shipley, owner, wanted the new business to have a certain look to make it unique. As the pieces to a  grain bin were shipped in from Kentucky and put together, she achieved just that.

“The Grain Bin Market, LLC had a unique twist to opening a store and market to attract both locals and tourists in its decision to reconstruct an old grain bin on site and use it as the store location,” said Jonathan Belcher, VCEDA executive director/general counsel. “The new business projects two full-time employees and five part-time employees within five years.”

“We rented a boom truck to get it put up and I bet there were a million bolts,” she quipped.

When it was all said and done, however, the new business had a unique look.

“Operating from an old grain bin lends well to the agricultural region surrounding Scott County and is a visual draw by the road to entice those travelling through to stop,” Shipley said.

“The VCEDA grant made a big difference for us,” Shipley said. “We didn’t even know it existed until we started the process, but when I found out we could apply, it was huge.”

Looking to the future, Shipley said the Grain Bin is looking to continue to host some live music events and food trucks from time to time and is considering offering Christmas trees and wreaths as the holiday season approaches. In October, an old-fashioned apple butter making event was held and some 109 pints of the sweet stuff were prepared.

Shipley worked with the Small Business Development Center (SBDC) at Mountain Empire Community College (MECC) in developing her application to VCEDA and received a letter of support from the Scott County Economic Development Authority.

“Mountain Empire’s Small Business Development Center enjoyed working with Tina to see her dream come to life. The VCEDA Seed Capital Fund allowed Tina the ability to complete her project.  We continue to enjoy stopping by the Grain Bin and seeing the progress it has made. The SBDC appreciates the opportunity to be a part of their success,” said Becki O’Quinn-Purdie, SBDC director at MECC.