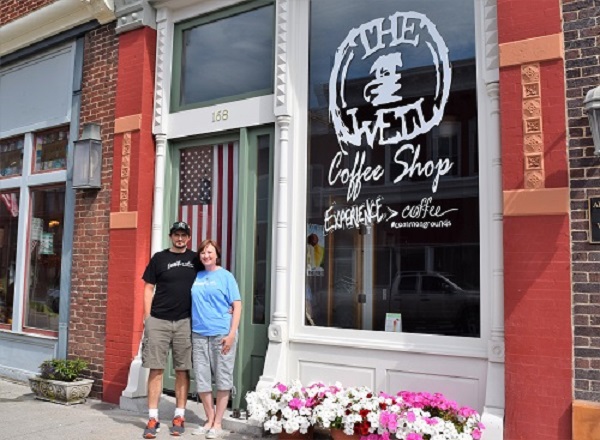 Lebanon, VA (July 7, 2017) — When Venus Laney was driving down Main Street in Tazewell a little less than a year ago, the idea came — seemingly out of the blue — to open a coffee shop in one of the historic buildings there that she passed every day on her way to work at the Tazewell County Probation and Parole Office.

Not only that, she says, but the name of the shop, “The Well,” came to her at the same time and she had no way to explain it other than it was something she was being led to do by a higher power and as she says without hesitation, “politically correct or not, it was God speaking to me and telling me what my next step should be.”

When the Virginia Coalfield Economic Development Authority announced the opening of applications for its Seed Capital Matching Grant program shortly thereafter, Laney says things begin to fall into place for the coffee shop dream to become a reality.

After her drive down Main Street, she went to her husband, Mike, and convinced him to go with her to look at the empty building on Main Street which once housed the old Clinch Valley Bank and later two jewelry shops in succession. Their business neighbor, Between Friends, located just down the street, helped to arrange a meeting with the landlord of the space the Laneys identified and soon they had their first look at the space.

“It was empty. It was rough and it was unfinished, but we could see right away it was the place to put the coffee shop,” she says. “We wanted to build a place of fellowship, a place where people could connect and we started to see the possibilities.”

But like most business endeavors, the financial realities crept into play and Laney says the couple, both of whom are Tazewell natives, began searching for ways to finance their dream. Mike began researching coffee houses, demographics, watching coffee house YouTube videos and checking into other things the couple would need to run the business. That all took place in the evenings when he got off work from his day job at Power Trac where he works as a purchasing agent. And along the way, the couple met Margie Douglass with the Small Business Development Center.

“Margie really helped us in guiding us through the practical steps to bring our dream to life,” Venus Laney says. “She is also the one who told us about the VCEDA grant so that we could apply.”

Working with Douglass, they applied for the VCEDA grant and learned in June their project was one of five in the region approved to receive $15,000 through VCEDA’s Seed Capital Matching Grant program.

Funds from the grant will be used to buy equipment needed to run the shop and to complete the renovations inside the building which were extensive and most of which were completed by Mike, who put in the sweat equity to get the space refinished. Elements of the old building were highlighted to allow a brick wall to be sealed and left exposed which adds to the historic charm of the space.

“My daughter says he builds my dreams,” Laney says.

The old bank vault is still in place and is now used by the Laneys as a pantry of sorts to store supplies. Mike made the dining tables out of pallets. Two church pews used for seating are a nod to The Well’s subtle theme and chairs purchased from M&E Antiques and More became a flea market flip of sorts, as their wood bases were painted with paint leftover from a previous color used in their home and seat cushions were reupholstered with burlap coffee sacks. An eclectic group of comfy chairs and a rocking chair line one wall opposite a long bar Mike fashioned out of reclaimed wood. He used leftover pieces of stamped tin from the ceiling as a backsplash for the condiments area. Burlap coffee sacks, like those used on the chair seats, were stretched to develop the art which hangs in the shop and large chalk boards display a menu of lattes, espresso, teas, smoothies, bagels, ham rolls, pepperoni rolls and pastries.

“We gave a lot of old pieces new life and new purpose, which is really the whole theme of The Well,” Venus Laney says.

“We named it the Well, because in historic times, the water well was the place of gathering and we want this to be a place where people can gather — where they can discuss their ideas and find common ground,” adds Mike Laney.

The use of “Common Grounds” as a tagline to their business name is not by accident.

“We all have different stories and different backgrounds, but we all have stories and we hope The Well provides a place for people to share their stories with each other,” Venus Laney says.

The Laneys are quick to acknowledge the help of Zazzy Z’s coffee house in Abingdon, which has provided the Tazewell entrepreneurs with lots of advice and staff training prior to the store’s official opening last month.

One of their first employees was Zoe Frank, who had moved back to Tazewell after having graduated from college. Frank was not sure what her next move was going to be when her path crossed with the Laneys at a small business workshop in Tazewell. The rest was history. The twist came when Frank found out the apartment a friend had found and leased on her behalf was actually the apartment located above the coffee shop where she now works.

Currently, the Laneys have a staff of five part-time employees in addition to themselves and they utilize a Burkes Garden Amish baker, Mattie Schlabach who provides the fresh pastries they offer with their coffee and smoothie selections daily from 7 a.m. to 5 p.m., Monday through Thursday; from 7 a.m. to 8 p.m. on Fridays; and from 10 a.m. to 4 p.m. on Saturdays. The shop is closed on Sundays. Catering is available to government offices and businesses surrounding the Main Street business and additional opportunities to grow have also been identified.

“We hope to begin offering acoustic music on the weekends in the not too distant future and we will extend our hours when there are Main Street Tazewell events ongoing,” Venus Laney says.

“VCEDA was pleased to be able to approve the seed capital funding for The Well,” Belcher says. “The fund was established to help local entrepreneurs with matching funding needed to help them realize their project goals. The Well presented a good business plan and solid market research, making them just the kind of project the seed capital fund was set up to assist.”

“We are so appreciative of the VCEDA seed capital grant,” Venus Laney says. “Not only does it help us, but it helps us to employ local people and it’s a validation that someone believed in us and believed in our dream to invest in our area like this.”