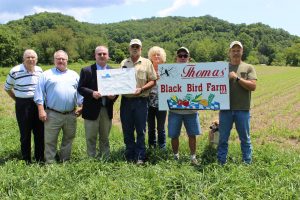 WISE, VA – JULY 31, 2019 – Whether it’s tomatoes, peppers or pumpkins, when it comes to fresh produce, Greg Estep, of Thomas’ Blackbird Farm LLC, in the Esserville area of Wise County, Va., is gearing up for the harvest, noting he currently has one of the largest, if not the largest tomato-pepper-pumpkin crops in Wise County. Also key to the new business is the development of a corn maze which will serve as a tourist attraction in the fall.

“Agriculture is one of the VCEDA target areas and assisting Estep in developing the farm and supplemental tourist attraction he has planned are a natural fit,” said VCEDA Executive Director/General Counsel Jonathan Belcher. “The business application projected one full-time and two part-time jobs within one year – which have already occurred — adding further to the regional economy and the success of the VCEDA Seed Capital Matching Grant program.”

“I grew up farming and never lost the love for it,” Estep said. “Farming has been in my family since Southwest Virginia was settled.”

For the fall, Estep is already working on developing the corn maze. Some 250,000 corn seeds have been planted and the corn is up and growing. Paths will be cut in the next few weeks. The surrounding corn will be allowed to continue to grow to form the maze.

In the center of the maze, Estep said, will be the shape of a guitar, a tribute to his son, Thomas, who among other things played guitar in his church praise band, and whose life was cut short by a drunk driver in 2017 at the age of 21. Since Thomas’ death, Estep has become a speaker and a volunteer for the Mothers Against Drunk Driving (MADD) program. He recently appeared in a television commercial heightening awareness of the importance of not drinking and driving, telling his family’s story of how a drunk driver changed their lives forever.

The farm itself is a tribute to Thomas and to carrying on the dream Estep said he and his son had to develop it. When Thomas was 15 or 16 years old, Estep said Thomas began laying out plans for a corn maze. Those plans are what his father plans to use to develop the maze. Approximately 5,000 pumpkins have been planted around the sides of the maze field and will allow visitors to pick their own pumpkins from the field.

“He was my farming partner and my best buddy,” Estep said.

In addition to tomatoes, peppers and pumpkins, beans, Indian corn, gourds and more are also in the plans. A seasonable vegetable stand and weekend events featuring music, corn meal grinding, apple cider and apple butter making, hayrides, children’s games and food on site are in the planning stages as well. It is expected the corn maze will open about the third weekend of September and remain open through the first weekend in November.

Estep worked with Tim Blankenbecler, of the Small Business Development Center at Mountain Empire Community College, in the development of his business plan and application to VCEDA.

“The VCEDA seed capital grant allowed me to be in the situation to put out the number of vegetables I am putting out and to do the corn maze,” Estep said. “I am extremely thankful and feel blessed to receive the grant.”