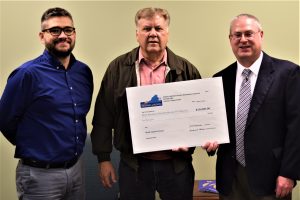 The business, owned by Harold H. (Buddy) Fuller Jr., and his wife, Patricia, is located on Buchanan County’s Jewell Valley Trail and is seeking to capitalize on its location and the ability to attract overnight visitors who wish to stay along the trail area. The new cabins, just like four existing cabins already on site, have ride-out access to Buchanan County’s Jewell Valley ATV-Bike Trail.

“Tourism is an economy growth sector VCEDA targeted several years ago and the White Mountain Cabins project was one seeking to grow in that tourism sector,” said VCEDA Executive Director/General Counsel Jonathan Belcher. “Although VCEDA has funded numerous projects in Buchanan County over the years, this request has the distinction of being the first seed capital grant request we have been asked to fund – and now awarded – in Buchanan County.”

He noted initial plans call for the construction of two 12 by 20 feet cabins to be added to the four existing cabins which currently sleep three to eight. Two of the cabins have efficiency kitchens and two have full kitchens and bathrooms. Additionally, three full-hookup RV sites are located on the property and eight primitive camping sites are also available.

“I’ll do most of the actual building myself,” Fuller said of the new cabins. “I plan to build them to keep a rustic look going.”

The new cabins will be capable of sleeping four. They will not have bathrooms, but will have access to a nearby bathhouse.

For vacationers looking for a way to unplug, Fuller said White Mountain offers it.

He noted when he built the initial cabins, he did so as a thought of building a place for his family to stay, but said the family never really utilized it. As he acquired additional property in the area, he said that was what started the idea to build more cabins and to seek to rent them to visitors. With access to both the Jewell Valley Trail in Virginia and the Hatfield-McCoy Trail in West Virginia, he said, the location is conducive to attracting overnight visitors who ride one or both trails. When the Jewell Valley Trail is ultimately linked to Spearhead Trails’ Coal Canyon Trail, he says he expects it will make his location on the mountain even more desirable as a destination.

He formed White Mountain Cabin Rentals and ATV Park, LLC in July 2018 and since that time has had several guests, including two short-term renters.

Information about the cabins may be found on Airbnb and on the White Mountain Cabins Facebook page. Fuller said plans are to develop a website in the near future.