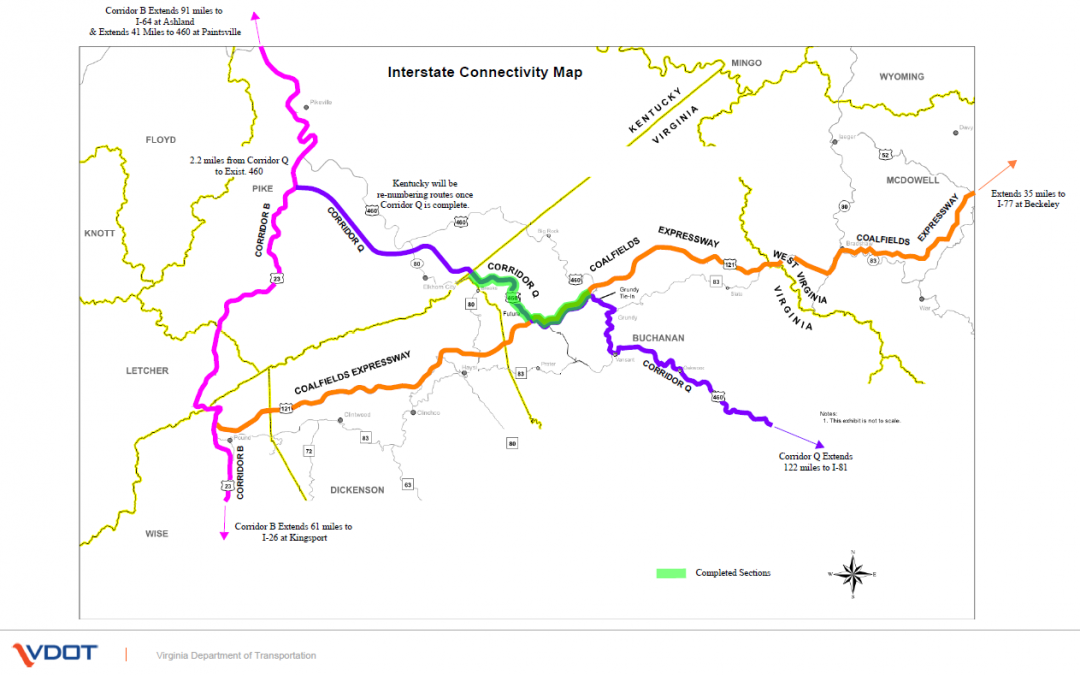 LEBANON, VA – JANUARY 12, 2023 – The 2022 annual report of the Virginia Coalfields Expressway Authority (CFX) was filed Monday with the governor’s office and General Assembly.

“2022 was a productive year for the Virginia CFX Authority and on behalf of the CFX Authority Board we would like to acknowledge the Governor’s Office, state and federal legislators, VDOT, local officials, the planning districts, the VCEDA Board and everyone else involved for their assistance and support in working on the expressway project in the past year,” said Jonathan Belcher, Virginia CFX Authority executive director. “The Coalfields Expressway remains a vitally important project for the future of the coalfield region of Southwest Virginia.”

The Virginia Coalfields Expressway Authority was formed by the General Assembly in 2017 to improve the transportation into, from, within, and through Southwest Virginia, assist in regional economic development, and generally enhance highway safety in the affected localities of Southwest Virginia. The Authority has a 12-member board and is staffed by the Virginia Coalfield Economic Development Authority (VCEDA).

The Coalfields Expressway, designated as U.S. Route 121 and a Congressional High Priority Corridor, is a proposed limited-access highway to provide a modern, safe and efficient transportation artery through the coalfield region of far Southwest Virginia and southern West Virginia. 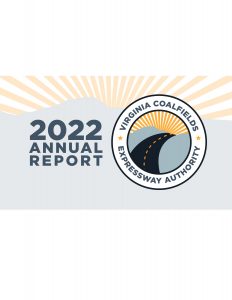 The report submitted to the governor’s office noted despite the fact the authority continues to remain unfunded operationally, 2022 proved to be a productive year. It recapped meetings held during the year, including an April meeting where authority board members were joined by U.S. Senator Tim Kaine and representatives of the Appalachian Regional Commission, among others, for a discussion on the expressway project. At that meeting, it was announced a congressionally directed spending request of $1.995 million had been obtained in the FY2022 federal budget for pre-engineering work on sections of the Coalfields Expressway from Grundy, Va., to the West Virginia state line. An additional $7 million for the roadway was included in the budget just signed by the president for FY2023.

The authority board’s June meeting was also productive, the report noted, adding the board was joined by U.S. Congressman Morgan Griffith, who spoke about efforts to obtain the $1.995 million in the FY2022 federal budget and his support for obtaining additional funding for the Coalfields Expressway. Updates were also provided by VDOT on how VDOT would use the $1.995 million approved. Also discussed was the current status of funding and construction of the Coalfields Expressway.

The board’s final meeting of the year was held in December, the report noted. At that meeting, Jay Rife was re-elected chairman and J. H. Rivers was re-elected vice chairman for 2023. The board also discussed a request made by Belcher on behalf of the authority to Virginia Governor Glenn Youngkin for $500,000 annually in state operational funding for the authority. The report noted Virginia Senator Travis Hackworth joined the board for that meeting and pledged to work with the Governor’s office in seeking the funding.

“The completion of the Coalfields Expressway will open up new areas for economic development, including new business and industrial sites and improved access to existing business and industrial parks, thereby making the region much more competitive for economic development projects,” Belcher noted. “The Coalfields Expressway also would allow the region’s citizens much better access to employment, educational, workforce development and health care opportunities.”

The report references an economic impact analysis of the Coalfields Expressway completed in 2021 by Chmura Economics & Analytics, which states the cumulative economic impact of the Coalfields Expressway during a 50-year span is estimated to be $12.8 billion in 2021 dollars. The study also noted that direct construction spending on the project can support 26,246 cumulative jobs in its bi-state corridor from 2013 to 2038.  It also found the cumulative ripple effect (indirect plus induced) of capital investment could generate $1.8 billion in spending and 13,859 cumulative jobs in the corridor.

“The cumulative direct and ripple effect of this construction spending therefore can support a grand total of 40,105 jobs, according to Chmura’s report,” Belcher added.

A full copy of the annual report may be found at https://www.vceda.us/wp-content/uploads/2023/01/2022-Annual-Report-of-the-Virginia-Coalfields-Expressway-Authority.pdf.